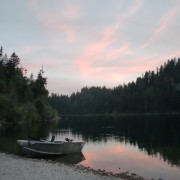 The North Star Complex fire has taken a favorite fishing area for a number of IEFFC fishermen.  Although no reports of the final damage have been received, it is reported that the fire did burn through the Long Lake area and is likely to have consumed the campground and surrounding forested area. 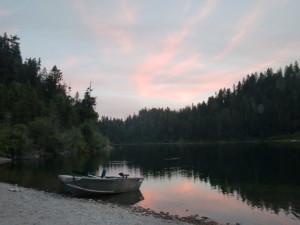 We are awaiting news as to the extent of the damage and will update everyone with any news we hear.  There is concern for the area as it does support one of the state’s few nesting pairs of common loons.  The lake also has a resident eagle, as well as a colony of beavers.  The area was the site of a recent IEFFC outing and hope is that the damage will be minimal and the recovery quick.

State fishery managers are closing or restricting fishing on more than 30 rivers throughout Washington to help protect fish in areas where drought conditions have reduced flows and increased water temperatures.

The closures and restrictions take effect Saturday (July 18) at 12:01 a.m. The changes will remain in effect until further notice. Fishing will be closed in some waters, and limited in others each day to the hours between midnight and 2 p.m. These “hoot-owl” restrictions will go into effect on rivers where fishery managers want to reduce stress on fish during the hottest time of day. High water temperatures can be deadly for fish, such as trout, while diminished stream flows can strand migrating salmon and steelhead, said Craig Burley, fish program manager for the Washington Department of Fish and Wildlife (WDFW).

This fall the public had a chance to respond to WDFW regarding a proposal to make it mandatory to retain Hatchery Steelhead.

The issue is quite complicated and we have tried to keep you up to date on it as much as we possibly can.  I appreciate that club members have utilized our email resources to communicate their opinions regarding the issue.  Going onto the internet or onto the WDFW website provides some information and individually that is what we recommend.

As a club, the one concern that keeps coming up as affecting our club members is the possible change of the regulations regarding the lower 2.5 mile stretch of the Grande Ronde.  We have responded to that part of the issue and would like to see that small areas regulations remain the same.

A proposal that would have required Washington anglers to keep all hatchery steelhead they catch from the Snake and Grande Ronde rivers was adopted but altered by the Washington Fish and Wildlife Commission.

The Washington Department of Fish and Wildlife had floated a rule that would make anglers keep all hatchery steelhead they catch in the two rivers.

But the proposal was watered down by the commission, at the recommendation of the department, during its meeting in Tumwater last week, the Lewiston Tribune reports.

The commission adopted a suite of fishing rule changes for the Columbia River basin on the east side of the state.

But it completely dropped the mandatory steelhead retention rule for the Snake River and reduced the scope of the proposal in the Grande Ronde.

John Whalen, fish program manager for the Washington Department of Fish and Wildlife at Spokane, said the catch-and-release only regulations for steelhead on the lower 2.5 miles of the river will remain in place during the fall and early winter.

Starting Jan. 1 each year, anglers fishing both the upper and lower portions of the Grande Ronde will have to keep all hatchery steelhead they catch.

But rules that prevent anglers from using bait and require them to use single, barbless hooks on the river’s first 2.5 miles will remain in place throughout the steelhead season.

The mandatory retention rule was designed to reduce the number of hatchery fish that end up spawning in Grande Ronde tributaries, where it is feared they will dilute the genetic traits of wild steelhead.

Whalen said the prospect of opening the lower section to harvest early in the season risked leading to crowded fishing conditions.

The state also heard comments from fisheries officials in Oregon, who said making anglers keep all hatchery fish earlier than Jan. 1 would target steelhead bound for the upper reaches of the river across the Oregon-Washington state line.

Also under the rules adopted by the commission, Spring and Blue lakes along the Tucannon River will be open year round.

Many anglers are puzzled by Washington Department of Fish and Wildlife’s big program stocking lakes with thousands of steelhead smolts this year.

News and rumor of river closures, lawsuits and extraordinary regulations abound from the Skeena to the McKenzie.  Short answer:  several actions  spring from litigation begun last year by the Wild Fish Conservancy (WFC) and other wild fish and angling advocacy groups over hatchery operations and compliance with the Endangered Species Act in Washington, and elsewhere the steelhead/salmon wars continue.

In a settlement between WDFW and WFC announced April 25, 2014, WDFW agreed to suspend the release of up to 900,000 juvenile steelhead into Puget Sound streams as of 2014.  WDFW retained the ability to place 180,000 fish into the Skykomish in 2014 and 2015.  Release in other Puget Sound rivers is suspended pending individual hatcheries obtaining  Hatchery Genetic Management Plans approved by the National Marine Fisheries Service.  In turn, WFC agreed to not sue WDFW for 2 ½ years  or until National Marine Fisheries Service approves those plans, whichever comes first.  There are other elements to the settlement, but these are the keys.

As a consequence, smolts otherwise destined for Puget Sound have been released to lakes unconnected to Puget Sound, and limits adjusted for anglers. Sprague Lake was one of the early recipients of these fish.

As this litigation proceeds, we can expect quick changes to rules governing steelhead angling in Washington, and annual changes in policy.  Similar actions are underway in Oregon, and BC rules have changed a couple of times in recent years in response to First Nations and others’ concerns. Short answer: check your regs and respective agency webpages to stay current before you go. 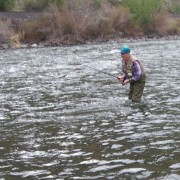 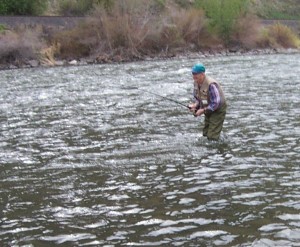 As felt soles fall out of favor because of invasive species concern, more thought is necessary to wade safely, especially in our local rivers.  The round basalt of the Ronde, Clearwater, and the low sand sediments of the Spokane are especially challenging.

Wading Staff– This third point of support will make all wading easier by letting you maintain two points of contact while one foot is making a stride. A wading staff may make the difference between staying dry and falling in, and lowers your anxiety level during difficult wading.

Go with the flow.  It’s easier and safer to move at a slight downstream angle with the current than move directly across or against the current.

Have the right stuff-Polarized lenses so you can see, felt or studded boots with good support so you can stand are essential. Take a look at your tackle system: do you need to pack all 45 boxes of flies, or will 40 do?  If you leave some of it at home, you won’t have to find it after you go swimming. 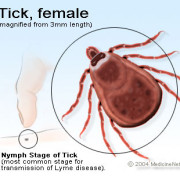 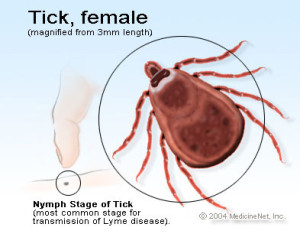 We are in that season where tick bites are a concern.  Lyme disease is our greatest concern, but ticks can also give us Rocky Mountain spotted fever, as well as a number of other infections.  Be careful, but also realize that most tick bites do not result in Lyme Disease, especially if the tick was attached for less than 24 hours.

To remove a tick, grab it close to the skin with fine tipped tweezers and use gentle traction to pull it out.  Do not twist it as the tick head has barbs and you may break off the head.  Wash the area with soapy water or a mild disinfectant.  Applying an antibiotic ointment is also recommended.  If  part of the tick remains in the crater, retain the tick in a closed container as a help in assessing the risk of infection.

If a rash or flu-like symptoms appear in the following 30 days report them to your physician.   Other symptoms can include weakness, nausea, fever, vomiting, palpitations, rash, joint pain, swelling, numbness, and confusion.  Lyme disease often results in an evenly red or a bulls eye shaped rash.  Rocky Mountain spotted fever causes a pinpoint flat rash on the arms and legs.  It is recommended to seek immediate treatment if you develop a Lyme rash.

1.Wear light-colored clothing so ticks can be easily seen, and brush them off.

Most importantly, don’t hesitate to seek medical help even if you aren’t absolutely sure you have been infected.  Timely treatment is critical and can help you to a positive outcome.

Catch and Release…Hmmm!  Maybe it does work.

Although there is a lot of controversy regarding the handling of fish, one thing for sure is we should all do our best to treat them well.  Whether we believe the fish will survive or not, being careless will only make it more likely the catch and release process will be unsuccessful.

A recent example of success was noted by The Silver Bow when Sean Visintainer noticed that a recently caught brown trout had the same spotting as one caught along the same stretch of the Spokane River two years previously.  The trout was visibly bigger and very healthy, causing us to believe that, at least for this fish, the process worked.

No matter where you are fishing, if you are practicing catch and release, do your best to give the fish every opportunity to survive.

On January 16 of this year, the Montana Supreme Court overturned a lower court and assured public access to the Ruby River from county bridges on private land. The decision in Public Land/Water Access Association, Inc.(PLAA)  v. Madison County sets a precedent that validates and affirms Montana’s stream and bridge access laws.

PLAA filed a complaint against Madison County in May 2004, alleging that individuals who owned property adjacent to the three bridges had erected fences along each county road to the ends of each bridge, preventing the public from using the bridge easement rights-of-way to access the Ruby River. PLAA sought, among other things, a declaratory judgment that the public may use several county road bridges and bridge abutments to access the Ruby River.

Madison County and the landowner defendant asserted the bridge easement gave only right of travel and bridge maintenance, and that no easement to the public for river access existed.

Many groups filed briefs supporting both sides of the case as it wound its way through the courts.

The Montana court concluded: ”… the scope of use of the public road right-of-way is not limited to the adverse usage through which it was acquired and that any foreseeable uses of a public road right-of-way, including recreational use, are permitted.”  Further, once accessed, the court indicated “it is settled law in Montana that the public may use the beds of non-navigable rivers, up to the high water mark, for recreation…. our Constitution, statutes and precedent preclude a riparian landowner from excluding public use of a streambed.”

Some irate landowners continue to hold that Montana’s public access laws infringe on private-property rights. For example, United Property Owners of Montana was highly critical of the decision.  It said, “Montanans awoke today to find their constitutional property rights further eroded by the Montana Supreme Court.” The group’s policy director said the decision ultimately may lead to a bigger win for landowners by providing an opportunity to appeal to the U.S. Supreme Court the larger issue of the constitutionality of Montana’s stream access law.

Though the question is perhaps not settled, this 10 year old case is an important precedent affirming public use of the public’s resource in Montana.