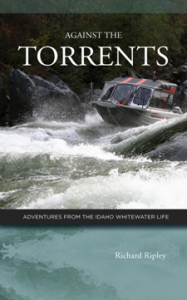 I wanted to let you know that my husband, Richard Ripley, will be reading from and signing copies of his new book “Against the Torrents, Adventures From the Idaho Whitewater Life,” on June 1 at 7 p.m. at Auntie’s bookstore downtown.

His book is about the life of Darell Bentz, a jet boat pioneer and one of Rick’s college roommates, and his brother, Rusty. They ran many of the world’s toughest whitewater rivers first or second, ran rivers in South America, India, Canada, Alaska, and the United States, grew up on a real Idaho cattle ranch in the Salmon River country, hunted and fished a lot, and were the great grandsons of John Crooks, the first man to bring cattle to Idaho County and the donor of the town site land for Grangeville, Idaho, for which he also laid out the streets. The Nez Perce War started on land that was either on or right next to what became the Bentz Ranch, and Thomas Meyers was lynched some years later on the ranch in one of Idaho’s most notorious unsolved killings. During his career, Darell pioneered whitewater hull design for jet boats, delivered boats on the Pacific and Arctic oceans, and along with Rusty navigated much farther up the Skeena River than anyone else ever has.

This is a free event and there will be snacks. I think it will be a fun evening and would love to have you all there.