Earlier this year the Washington State Council of the International Federation of Fly Fishers (WSCIFFF) asked fly fishers and fly fishing clubs from around Washington State to write to their legislators for support in budgeting money for the Washington Department of Fish and Wildlife (WDFW) to repair or replace the lower foot bridge on Rocky Ford Creek that has been determined to be unsafe.  Most fly fishers in our state have fished Rocky Ford at some time, especially in the winter when there aren’t many other places to go.  The lower bridge is critical to accessing some of the best fishing. 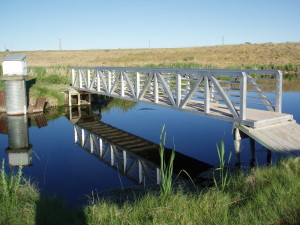 During the 2015 legislative session the Washington State Legislature passed funding that included money to repair or replace the bridge.

There was considerable sticker shock generated by the $300,000 budgeted for the project by the Washington State Fish and Wildlife Department.  A major element of the projected cost was to accommodate dramatically increased flows caused by major changes in the Columbia Basin irrigation system.  The increased flow is now a reality.  IEFFC member Bob Anderson stopped by Rocky Ford a few days ago and was shocked by what he saw.  Bob said that the increased flow has caused big changes making long-time access spots unusable.  As Bob said, “we will have to learn how to fish Rocky Ford all over again”.